The importance if Oxygen to heal

by Michelle Faber | Apr 29, 2022 | ABOUT HYPERBARIC OXYGEN THERAPY, All Blogs 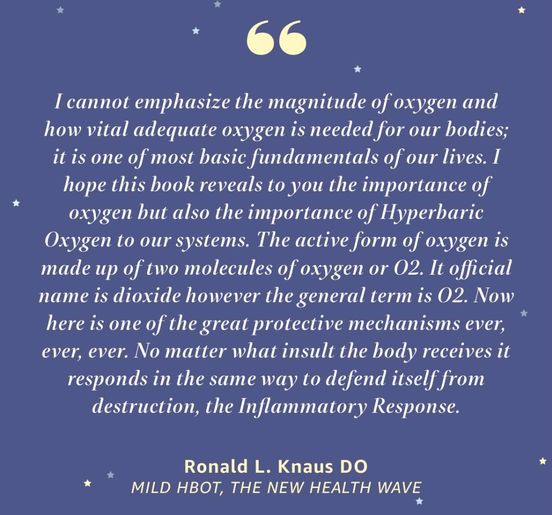 The importance of Oxygen to heal
With the major advances in our society we have moved from being ‘free breathers’ to ‘breathing with costs’; it actually costs us to breathe our own air. The cost to our human operating systems, to our health care systems, and to our earth’s eco-system is not only dramatic but dangerous. When earth dies, we die. We are developing one chemical after another to kill off every known ‘ugly insect’ as a part of everyday life for most of us. We use antibiotics for every elevation of temperature and use all types of pesticides and chemicals to make everything ‘clean’. Many scientists feel that we may have gone too far and no longer have the natural immunity defenses to ward off infections. We are polluting our world to the point that our air quality has greatly diminished; like Johnny said, “
“Don’t trust air you can’t see.” It is time we look at the air we breathe, how much oxygen we need and are we getting enough? All plants and animals, in other words all living things, rely on Oxygen for respiration and life. (It is also the main illuminating substance in the Aurora Borealis… talk about energy; how cool is that?). Oxygen is the life force for all cells in the body so there must be a system in place for the transmission of oxygen to the cells.
“Hyperbaric oxygen” means Oxygen under pressure of more than 1 atmosphere (the pressure of atmospheric air at sea level) or 1 ATA; the pressures can vary as well as the oxygen content depending on which the type of chamber.
mHBOT means increasing the atmospheric pressure from 1 ATA up to either 1.3 ATA (or 1.5 ATA) and with the use of an oxygen concentrator which increases the % of oxygen supplied to the different bodily fluids such as plasma, cerebral spinal and lymph fluids.
Under normal conditions, only the red blood cells carry oxygen to nourish the cells, and fight infections. Now here is an interesting aspect of oxygen under pressure; when oxygen is applied under pressure it rides along in the plasma (remember that plasma is our train and it can carry a lot of passengers) up to 10 times the normal amount. Because hyperbaric pressure forces oxygen into the fluids of the body we see much higher levels of oxygen in and available from these fluids”
The importance of Oxygen to heal: I cannot emphasize the magnitude of oxygen and how vital adequate oxygen is needed for our bodies; it is one of most basic fundamentals of our lives. I hope this book reveals to you the importance of oxygen but also the importance of Hyperbaric Oxygen to our systems. The active form of oxygen is made up of two molecules of oxygen or O2. It official name is dioxide however the general term is O2. Now here is one of the great protective mechanisms ever, ever, ever. No matter what insult the body receives it responds in the same way to defend itself from destruction, the Inflammatory Response. “
— MILD HBOT, THE NEW HEALTH WAVE by Ronald L. Knaus DO