We all dream about relaxing in a beach chair, breathing in moist, salty sea air. But when you can’t visit the beach, you might consider going to a salt cave.

You might wonder: what is a salt cave, exactly, and what are some salt cave benefits? It’s exactly what it sounds like: a man-made cave constructed entirely of salt—usually pink Himalayan salt, though dead sea salt is sometimes used too. It’s designed designed to deliver a host of physical and mental benefits. Read on, and we’ll tell you about four of them:

It may help you breathe easier.

Salt cave and salt room benefits are wrapped up in an alternative medicine technique called “halotherapy,” which may help lessen the symptoms of many respiratory illnesses. How? The negative ions in salt particles may help purify the air and increase lung capacity. Other potential effects of halotherapy include:

As great as the Himalayan salt benefits are, a trip to a salt room isn’t a cure or a replacement for a trip to the doctor. But if you just want to breathe a little better for an afternoon, it might be worth a shot.

It can make your skin look great.

This may be the most recognized of salt cave benefits. The salt has upwards of 84 minerals that can be absorbed through the skin, so you’re actually nourishing your body as you relax and breathe deeply. Though it might sound counterintuitive (you’d think sitting in a salty room would dry out your skin), mineral salts actually do the opposite, helping to attract moisture to skin. Combine that with Himalayan salt’s natural anti-bacterial and anti-inflammatory benefits, and you can potentially help clear up issues like eczema and psoriasis.

It can cure the blues.

Salt-cave experts say that spending just 45 minutes inside a salt cave is roughly the equivalent of spending two whole days at the beach. If the thought of that doesn’t already boost your mood, consider this: the negative ions in the air may help boost your mood and give you more energy. Some visitors find it helps them with issues such as insomnia, stress, and seasonal affective disorder.

It can help you unplug.

If you’re feeling anxious or stressed about work, life, or anything else, a session in a salt cave can help you forget about all that. A recent study from Annals of Agricultural and Environmental Medicine found that many people go to salt caves for its therapeutic benefits, and that most reported feeling better afterwards. The study concluded that the salt caves “help to support a proper lifestyle.”

Due to the fast growth of technology and environmental pollution, more and more people suffer from allergies, asthma and other civilization generated diseases. Outside air in cities and even mountain microclimates are weak in iodine and other important elements for our health. Dust, cigarette smoke, modern convenient electrical appliances such as TVs, computers and high-voltage networks produce large quantities of positive ions creating electrical imbalance in the air, and our bodies. 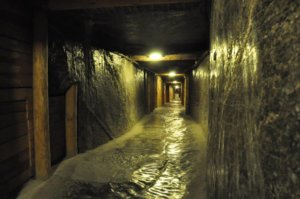 THE UNIQUENESS OF THE SALT CAVE

The salt cave creates a sealed environment where the negative ions are disbursed in the atmosphere and absorbed by the body via the skin and the respiratory system. Apart from the advantageous negative ionization, the air in the salt cave includes sodium, potassium, magnesium, calcium, iron, bromine and iodine. These minerals have a positive influence in the treatment of such diseases as, respiratory illnesses (asthma, allergies, chronic inflammation of lungs, sinuses, emphysema), cardio vascular diseases, digestive disease (colitis, gastric ulcers), dermatological conditions (acne, psoriasis, dermatitis), and nervous system malfunctions (stress, rapid breathing, inability to concentrate).

Using the Wieliczka model our Salt Spa will be identical in terms of physical, chemical and biological conditions that are present in the mine, which creates a positive effect on health.