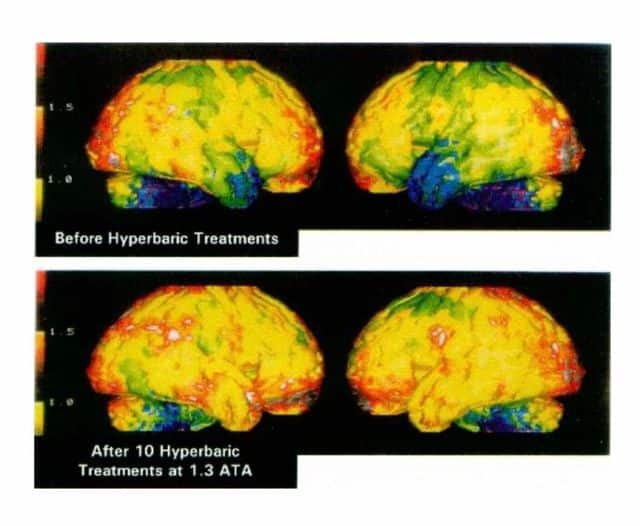 Dr. Gunnar Heuser, a toxic exposure specialist, documented results of a series of hyperbaric treatments on 9 patients suffering from Impaired Brain Function. The purpose was to study the effects of 1.3 ATA of hyperbaric therapy on those patients. His patients included individuals who suffered from impairment to brain function such as memory and balance due to years of exposure to a variety of chemicals, pesticides and solvents. Some patients had developed attention deficit disorder and may well have been experiencing disabling effects that altered their quality of life, It is important to note that MRI scans confirmed that there was no cell death in those patients, only loss of function.
Methods:
Each patient was given a series of 10 hyperbaric treatments: one hour per day for five consecutive days for two weeks. To objectively test the effects of the hyperbaric sessions, SPECT scans were taken of each patient’s brain before and after the series of treatments.
Results:
Every one of the patients who participated in the study showed improvement after only 10 treatments. Reporting fewer problems with short term memory, balance, headaches, and other symptoms of poor circulation in the brain. The SPECT scans objectively confirmed an increase in blood flow and oxygen to effected areas of the brain such as the temporal lobe, the part of the brain where short term memory is located. The improvements in the temporal lobe seen in the SPECT scans were verified when the patient regained his short term memory.
https://www.drneubrander.com/…/Brain%20Study…