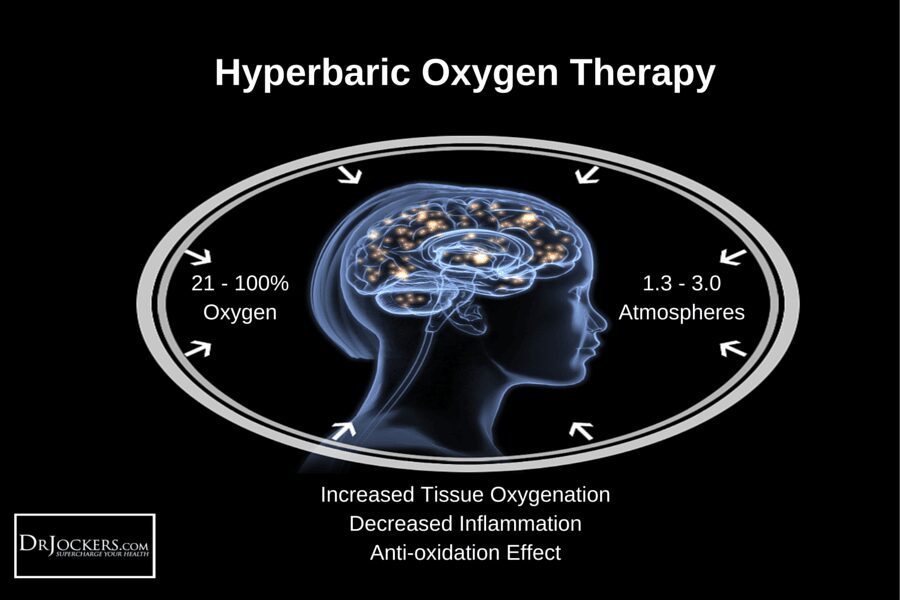 Humans depend upon the consumption of oxygen all the time.  Most atmospheric air is comprised of roughly 21% oxygen.  Oxygen is necessary for the production of cellular energy in the mitochondria of every cell in the body.  The use of pure 100% oxygen in a high pressure atmosphere has been shown to have extraordinary health benefits.  In this article, you will discover the health benefits of hyperbaric oxygen therapy.

The hyperbaric chamber has pure oxygen coming in at pressures 1.5 – 3 times the normal atmospheric pressure.  Treatment times range from 30-90 minutes.  Using oxygen at higher pressures causes up to 20 times more oxygen to be absorbed by the blood and transferred to injured organs and tissues. This speeds healing and recovery time in addition to other benefits.

Breathing in 100% (pure) oxygen under increased pressure, called HBOT, allows extra oxygen to be taken up by the bloodstream and dissolved at a far greater rate. This extra oxygen can help where healing is slowed down by infection or where blood supply is limited by damage to the tissues.

100% oxygen is considered a drug by the FDA and one needs a prescription to use it.  Mild HyperBaric Therapy (mHBOT) has shown significant results and uses around 95% oxygen in a 1.3-1.4 atmospheric pressure.  This is a much lower cost treatment that has little to no risk and great benefit.

HBOT Has Been Shown To:

Any condition which results in inflammation in the body can benefit from HBOT (1, 2, 3).  HBOT increases the dosage of oxygen and delivers more O2 to damaged areas in the body and stimulates the healing process.  Oxygen is one of the most natural antibiotics and it controls over 8000 genes.  A course of 20 sessions of hyperbaric therapy increases our stem cells eightfold (4, 5, 6).

HBOT has been shown to improve oxygenation, new blood cell formation (angiogenesis) and new nerve growth (neurogenesis) in the brain (7).  This mechanism explains why HBOT therapy has had such great results at restoring function in individuals with traumatic brain injuries, strokes and neurodegenerative conditions like dementia (8, 9, 10).

There have also been many positive studies about HBOT usage with Autism (11, 12).  One 2009 study looked at 62 children with half getting slightly pressurized air (1.03 ATM) and the other half getting mHBOT (1.3 ATM – 24% oxygen) treatments.  The study showed that the children with autism who received hyperbaric treatment for 40 hourly sessions had significant improvements in overall functioning, receptive language, social interaction, eye contact and sensory/cognitive awareness compared to children who received slightly pressurized room air (13).

HBOT is an acceptable complimentary treatment for cancer patients undergoing radiation treatment.  HBOT has been shown to reduce inflammation in bones and adjacent tissues where radiotherapy creates an excess amount of reactive oxygen species (14).  It also helps with the regeneration of blood vessels that are damaged by radiation.

A 2006 study in Japan involving patients with brain tumors receiving radiation and chemotherapy experienced much longer survival times and reduced side effects when using HBOT as a complimentary treatment (15).  Another 2009 study showed extended survival times and reduced side effects using HBOT with radiation treatment in patients with glioma tumors (16).

Famous cell biologist and cancer researcher Otto Warburg discovered that cancer cells have an altered metabolism and are unable to produce energy through cellular respiration.  The mitochondria in each cell produce the energy that drives the cellular functions.  Under normal circumstances, the majority of energy is derived in the prescence of oxygen in a process called aerobic metabolism.

Cancer cells have lost this ability to produce energy through the Krebs Cycle and instead drive all of their energy from substrate level phosphorylation through glucose fermentation (17).  Other researchers such as Dr Thomas Seyfried have found that cancer cells run off of both glucose and amino acid (glutamine) fermentation.  Both of these processes are anaerobic and don’t use oxygen (18).