MHBOT for athletes and recovery 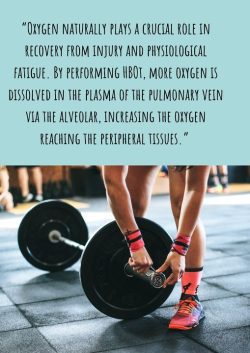 There has recently been a resurgence in interest in hyperbaric oxygen treatment in sports therapy. Oxygen naturally plays a crucial role in recovery from injury and physiological fatigue. By performing treatment , more oxygen is dissolved in the plasma of the pulmonary vein via the alveolar, increasing the oxygen reaching the peripheral tissues. HBOT is therefore expected to improve recovery from injury and fatigue. HBOT has been reported to reduce post-injury swelling in animals, and in humans; swelling was also mitigated, but to a lesser extent. Positive results have also been reported regarding tissue remodelling after injury, with injuries involving bones, muscles and ligaments showing improved recovery. Furthermore, the treatment has effectively increased recovery from fatigue.
A great example of mhbot being used as recovery from muscle fatigue occurred during the Nagano Winter Olympics with seven participating athletes. They received hbot treatment are 1.3 ATA for 30-40 minutes, with a maximum of six times per athlete and a average of two times per athlete. An athlete who experienced sharp pain of the muscles was able to play a game after hbot treatments with almost no pain. These tests help show that players can greatly benefit from the conditioning effects of mhbot.
Source:
https://pubmed.ncbi.nlm.nih.gov/16138784/